Blog - Latest News
You are here: Home / Why Rhino? / How Rhino’s ease of use helps Spirits Platform grow

Spirits Platform was created in August 2015 by its senior management team alongside brand partners Remy Cointreau and Zamora.

Since its inception, Spirits Platform has been supported by the strength and resilience of Rhino, the simple CRM system by ForteIS. We sat down with Ben Inglis, National Sales Manager, and Marie-Claire Piga, Director of HR, Finance and Operations, at Spirits Platform to discuss how Rhino has supported their business over the last five years.

Moving up in the CRM world

We’ve been able to build strong KPIs in Rhino, which will ultimately result in increased sales.

Prior to Spirits Platform, the sales team used a custom CRM system developed in-house. With the dissolution of the company, the team needed to find a new solution – that’s where Rhino came in.

“Our relationship with Rhino developed over our CRM needs within the new company and coincided with ForteIS having a platform specific to the liquor industry ready for us to use,” Marie-Claire recounted.

“What we found,” added Ben, “was that Rhino’s capability and functionality for the end user was far superior to what we’d experienced previously. Better still, it was all handled externally. As a small business, we didn’t have the manpower to set up an internal CRM, so to go to the market and see Rhino, which was better than what we’d previously developed for ourselves, was fantastic.”

“The biggest benefit is really to our Ambassadors and BDMs,” said Ben. “When they’re working in a customer call, it’s so easy to quickly put their marketing activity into the call card and navigate around what’s happening in the call. For us, the main goal for a CRM is that the sales team are using it and that it’s a genuinely valuable tool for them – and Rhino is exactly that. Because they’re actively using it, and it’s not getting in their way, we’re getting accurate business data all day, every day while our reps get more face time in front of their customers.”

Marie-Claire spoke to the overall business benefits of Rhino: “We’ve been able to build strong KPIs in Rhino, which will ultimately result in increased sales.” Meanwhile, Ben explained that the straightforward back-office portal of Rhino meant that if they needed to do any additional data manipulation, they were able to effortlessly export the required data.

Developing a CRM with their business

While Spirits Platform’s business grows, they’re able to have Rhino grow alongside them to meet their changing needs.

“What I really like about Rhino,” Ben enthused, “is that you get to see how different people choose to use it. That’s led to a number of alterations ForteIS have happily implemented based on how our reps use the system and what we need from them. A lot of the new features we’ve introduced over the years have come directly from the minds of our team, so they’re directly relevant and actually get used.”

Marie-Claire echoed this sentiment, adding: “There is no doubt that the CRM features have improved immensely over the five years, so we are looking at a CRM much different to that initially implemented. This has resulted in greater ease of use which translates into more effective calls and better planning.”

As an example, Spirits Platform were interested in changing the top-level modules that appeared when reps first opened the app to those that were more relevant to the data they wanted to collect. We were happy to make this change quickly.

“We wanted our reps to update their meeting notes more often so we could pull that data at the end of a quarter when we sit down to review their progress, and have an accurate paper trail of how they’ve developed and how they’re tracking on their goals,” Ben explained.

Not just a supplier – a partner

Both Ben and Marie-Claire credit the continued excellence of Rhino to their strong relationship with the team at ForteIS.

“We met Sandy and Laura five years ago and the relationship has gone from strength to strength,” Marie-Claire elaborated. “Sandy is incredibly supportive in meeting our changing needs and working with any other business partners within our universe. We cannot fault the relationship that has developed over this time. It’s the sort of relationship that yields great results for all.”

“Sandy and Abdul are fantastic. Abdul’s an absolute machine,” Ben added. “Some things are super easy and Abdul gets it done really quickly – that’s something I really like about our relationship with ForteIS. I don’t have to feel pressured into paying huge amounts of money for a simple change.”

“It’s so important that we’ve got a relationship where we’re always working together to make the system better. If the system’s great then no one’s ever looking to move. And if you’ve got someone helping you achieve that as best they can, you’re only ever going to both succeed.”

Over the years, the dedication and collaboration between ForteIS and Spirits Platform has led to the creation of a highly tailored, successful CRM system that delivers real results to the business. If you’d like to learn more about how Rhino can transform your customer relationship management, reach out to ForteIS today to book a free demo. 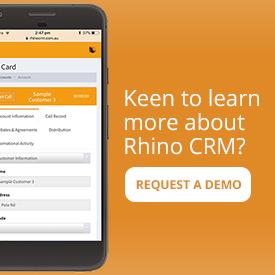